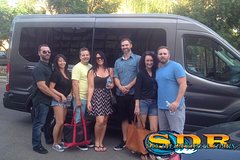 The Number one Craft Brewery experience in San Diego with visit to the best central San Diego Breweries and a 1-hour long behind the scene tour at Green Flash or Ballast Point. Learn everything about the beer production while tasting great beers

Welcome to San Diego, the new beer capital of the United States. San Diego is encountering a micro brewery phenomenon that has started to evolve from 1989 with Karl Strauss Brewery as a pioneer.
We will safely escort you to the central San Diego North County breweries in one of our brand-new vehicles. We will visit 3 of the best breweries in San Diego.
We will do at least one behind the scene visit (Green Flash or Ballast Point) to learn about the brewery process. At each stop you will be explained the steps on how the beer is produced and our experimented tour guide will give you an introduction to the hops that make all the craft beers so special.
We will end our visit in a Micro Brewery in the cozy tasting rooms. (Rough Draft, Indian Joe or Coronado brewery)
Time permitting, we will do a quick surprise stop to a local brewery. At each stop you will be served a Brew master’s selection of their finest craft beer to familiarize you with the different types and flavors of beer. Food is usually available at most of our stops.
We have partnership with the following breweries : Ballast Point, Green Flash, Stone, Ales Smith, Rough Draft, Lost Abbey, Breakwater, Rip Current, Oceanside Ale Works, The Draft, Mother Earth, Latitude33, Indian Joe, Accoustic Ales, Mission Brewery, Rock Bottom Brewery, Mike Hess, Desperado, Hillcrest Brewery, Coronado Brewery, Karl Strauss, Port Brewery & many more…
The tour includes :
• Transportation to the breweries
• Knowledgeable and fun tour guide
• Samples and information about the different styles and tastes of beer
• Beer flight and / or tasters at every stop (at least 3 samplers per stop)
• One in-depth behind the scenes tour that explains the brewing process and the hops
• Gratuities for the waitersThe tour doesn’t include :
• Gratuities for the guide
• Meal (optional with food truck : approx. $15.00)
• Extra samplers (we do not recommend over-consumption of alcohol)
Pick up location :
• In front of 500 West Hotel (500 W. Broadway, 92101 San Diego)
• Old Town Transit center on Taylor Street. (next to bus stop 30)

The Number one Craft Brewery experience in San Diego with visit to the best central San Diego Breweries and a 1-hour long behind the scene tour at Green Flash or Ballast Point. Learn everything about the beer production while tasting great beers